I was 27 years old when I decided to go into law enforcement. I left McAllen, Texas, and moved to Houston when I was 18. I was married and co-owned a used car business at the time, working with my brothers, managing the day to day operations. I also owned and operated a Mexican Restaurant. Yet, I always felt that I wanted to do something more to help others.

My life changed when I decided to go to the University of Houston. There I met a Sergeant who was running one of the cadet courses for the police academy. I was allowed to sit in on a class. Watching all of the cadets made me realize what I wanted to do. I felt if I became a police officer, I would be able to help people in need.

After my graduation from the academy, I joined the Fort Bend County PCT 4 Constables Office as a reserve. After nine months, I was called by the Fort Bend County Sheriff’s Office to become a full-time deputy. With the support of my wife and our three children, I sold my restaurant and became full time as a peace officer. I served as a Fort Bend County peace officer for 23 years. I have taken an active role giving back to my community by working with The Women’s Shelter, Light of America, City of Houston Thanksgiving Day Meal, and Toys for Tots. I became a certified Master Peace Officer, First Line Supervisor, Field Trainer Officer, and TCLEOSE Instructor.

Previously I have been recognized as Employee of the Year Fort Bend County Sheriff’s Office, Law Enforcement Officer of the Year from the American Legion Post 271, Recognized by the City of Houston, Mayor Bill White for Exemplary Service, and received a Commendation from County Judge James C. Adolphus for Excellence in Performance in the Line of Duty and Sheriff’s Award for Exemplary Performance of Duty. While my son, Eli Alonso, has also proudly served as a police officer for 15 years.

Being a police officer, a parent, and a husband has many things in common. One is to serve. You serve the ones you love and your community. The primary responsibility of all law enforcement agencies is to work for the benefit of society and serve the community. As a resident of Precinct 3 for over 32 years, I have witnessed a lot of changes in our community. From the small town countryside to becoming one of the fastest growing areas in the United States. The county has become more advanced, and so has the challenges facing this community. This is why I am asking for your vote to be the next Constable of Precinct 3.

With a population growth rate of 26%, Fort Bend County is changing rapidly, and so are the needs of Precinct 3. Modern-day law enforcement needs to become flexible enough to quickly adapt along with the times to address these challenges before they become a crisis.

If Precinct 3 were a city, it would be the 10th largest city in the state. It’s larger than the population of Sugar Land, Richmond and Missouri City put together. Each year we’re adding an area the size of the city of Rosenberg. - Source 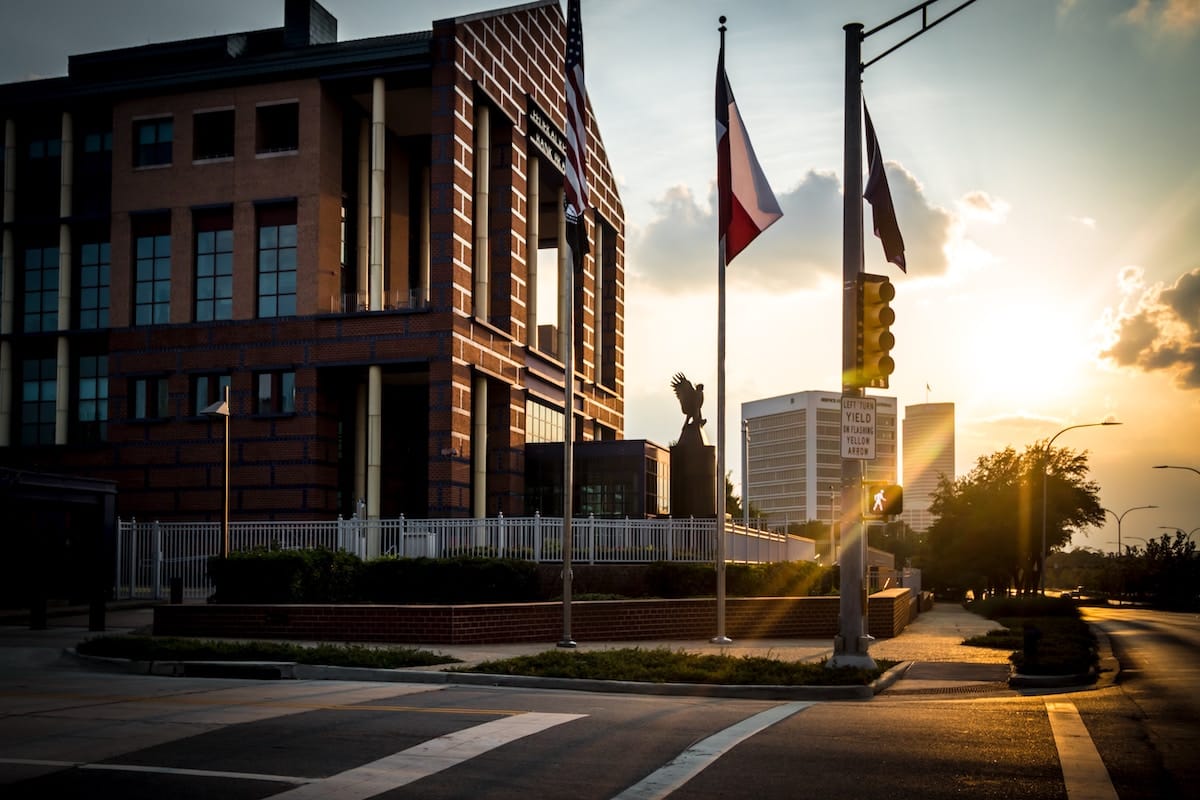 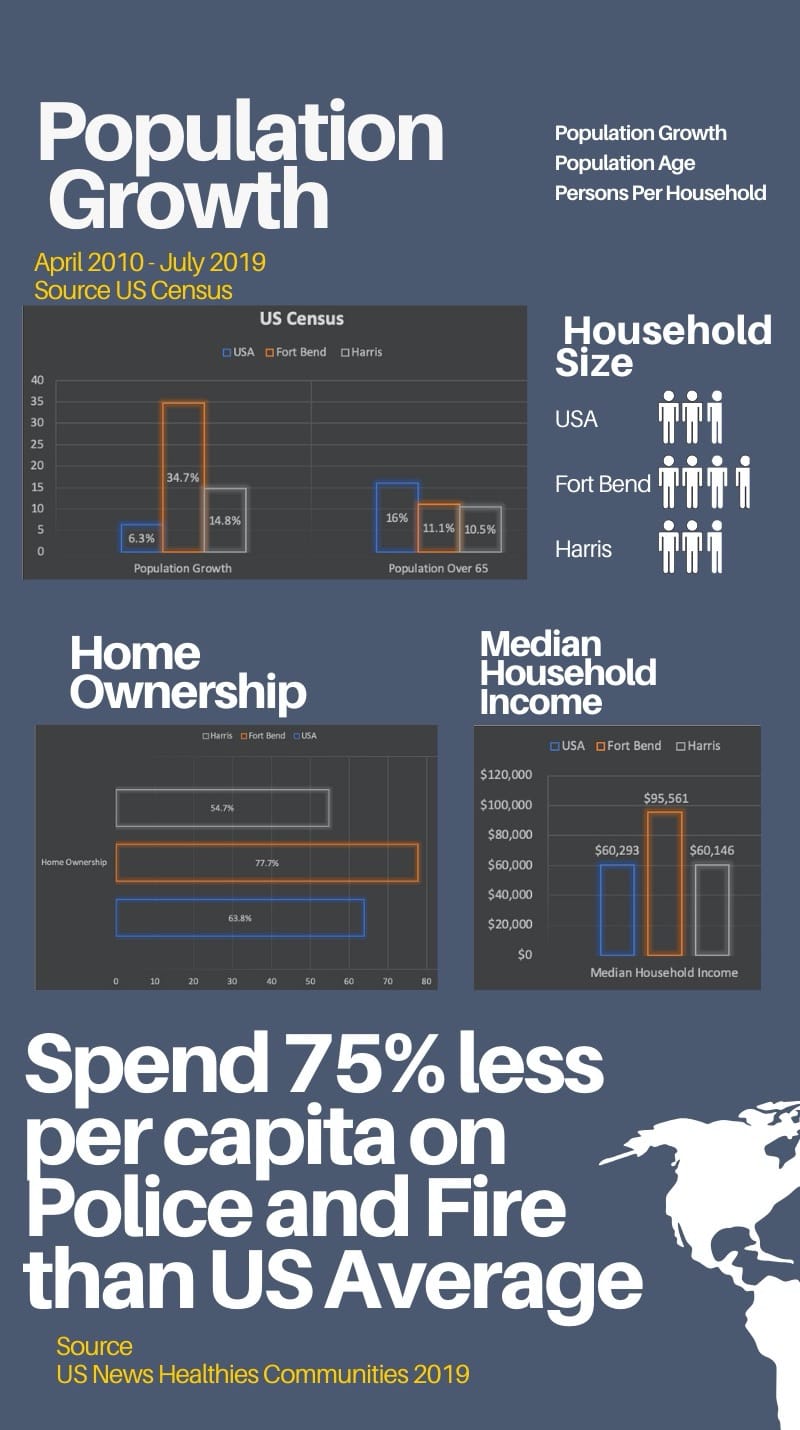 What does this mean for the future?

Calling home to 3 out of the top 10 schools in the Houston Metropolitan Area, Fort Bend County Precinct 3 has become an attractive place for younger and wealthier families to settle down. With a median household income 47% higher than the US average, we spend 75% less on Law Enforcement and Fire Departments than the rest of the country and 54% less than the state average.

As years progress, Fort Bend County Precinct 3 will continue to attract massive growth. With these circumstances, Precinct 3 Constable’s Office needs the ability to act fast and provide community policing services tailored to the unique challenges of the precinct. As a resident of Precinct 3 for over 32 years, I have witnessed this growth firsthand. Elected as Constable, you will always have a place to voice your concerns, and we will do everything possible to provide a better and safer place for your family and mine.

We Fight Together, We Win Together

We are here to help answer any of your questions 7 days a week and will respond within 24 hours. Get involved and keep our neighborhood safe.

If you are a reporter looking for an interview please contact us at:

Paid For & Designed By STELLATUS STUDIOS